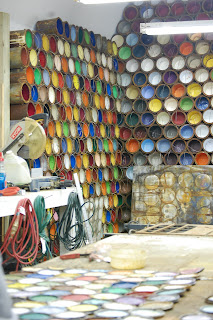 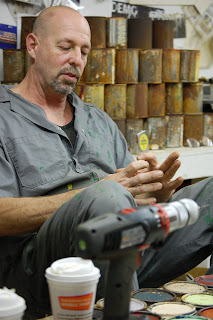 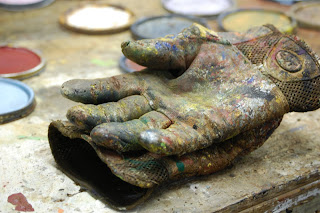 I just returned from a delightful morning at Steven Dobbins studio in Mt. Airy, MD. He opened his studio for anyone that wanted to drop in and see what was going on. He is in the final preparations for an upcoming show in NYC at the Cuasey Contemporary Gallery , Brooklyn. Steven is a fellow member of TAG (The Artist's Gallery ) in Frederick, MD where he last year had a "trial run" of this show. Hey, if it plays well in Frederick take it to New York ! Upon entering the studio one comes face to face with more than a few paint cans that he has emptied,dried, treated, some repainted the insides, cut or bent, drilled, wired and anything else that the muse tells him to do. He is planning to stack the cans in a couple free standing pieces and another piece will cover a large section of wall space as it did at TAG. New to the mix is at least two pieces consisting of the can lids wired together as almost a fabric to be draped or hung. While I was there a couple other colleagues showed up and it was a great time discussing art and materials, shows, studios, etc. Times like this are inspirational. Whenever I'm with this group I feel like a "real" artist and I want to run home and make stuff. Thanks Steven !
Posted by Janet Belich at 2:12 PM