My very DEAR friend Cathy with her new T-shirt to benefit the wild critters in the Gulf of Mexico. Cathy doesn't do much "half way" ; she also ordered a mug, a tie and a bumper sticker !!! I thank you Cathy, and I'm sure we helped wash a few birds this way.
Posted by Janet Belich at 11:23 AM 2 comments: 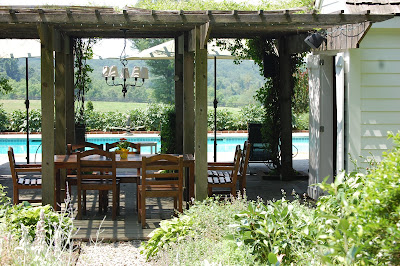 Yesterday I was to the beautiful rolling hills of Maryland horse country for an outing of painting with some members of the Baltimore Water Color Society. Our hosts graciously opened their grounds for about twenty artists to tramp around, photograph and paint. Southern Living had been there just days before to take photos for a future issue. The gardens were in glorious color, the house, barn and out buildings were a Tom Sawyer white washed clean that sparkled in the morning sun. No humidity, light breeze, clear sky...what I call a "water color day". 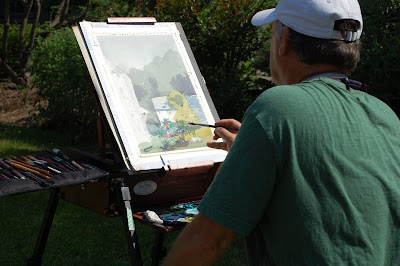 As part of the 125 year celebration of the founding of BWS, we were treated to a demo by Stewart White. Stewart is a well known artist from the B'more area with many,many awards for his plein air paintings. He does architectural renderings as his day job. 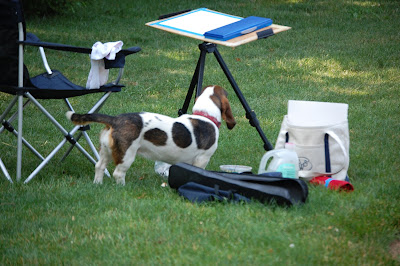 This was my set up. I had things laid out , ready to go to work and even had the scene sketched in and was watching the demo when I turned around to see "Sophie" aka "Princess" lapping up the water from my container. Just like home. :) 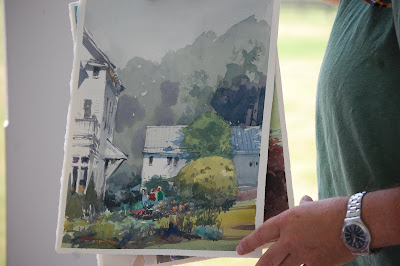 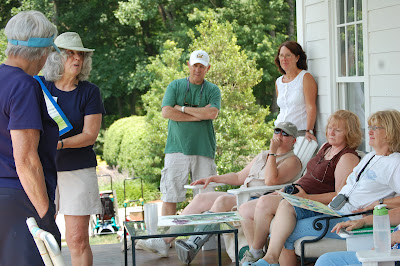 And here, an informal critique before heading home.
Second from right is my friend Debi Watson. She wrote on her blog afterwards that plein air painting isn't for whimps, citing the bugs, heat, etc, etc. Debi is an aclaimed watercolorist but who preferrs the studio to plein air painting. This was my first serious outting probably since college and I have to say I rather enjoyed being outside, esp. with a group of other painters... hmmm...perhaps a workshop tour someday?

Art Vs Oil Spill:Artful Products at Zazzle for Save the Gulf- Wild Life Rehab

Art Vs Oil Spill:Artful Products at Zazzle for Save the Gulf- Wild Life Rehab
Paul Jackson has offered artists a way to do something about the Gulf of Mexico. He has set up a Zazzle store where you can buy products with the proceeds going to the Wildlife rescue. Here's a link to the online store, there are 18 new products in just the first day, so please take a look. Zazzle store link.
This online Zazzle store features a collection of artwork donated by artists around the the world specifically to benefit wildlife rescue operations along the Gulf Coast in the wake of the BP oil spill disaster. Proceeds from your purchase will benefit an organization that is all volunteer and they will use the funds where they can do the most good. The name of the organization is Wildlife @Rehabilitation & Nature Preservation Society, Inc. or WRANPS. TIN is 64-0701440. They were formed in 1983 and are a 501(c)3. Their info can be verified on Guidestar, the official website that monitors US Non-Profits. They are also registered with the Secretary of State of MS as a Charity. Their address is P O Box 209; Long Beach, MS 39560. Please feel free to donate to them directly! Make checks payable to Wildlife Rehabilitation & Nature Preservation Society, Inc. or WRANPS. P O Box 209; Long Beach, MS 39560. (in the note/subject line of your check, please include "art vs oil spill") Attn: Jan Dubuisson Thank you for all that you can do to help!!
Posted by Janet Belich at 1:28 PM 1 comment: 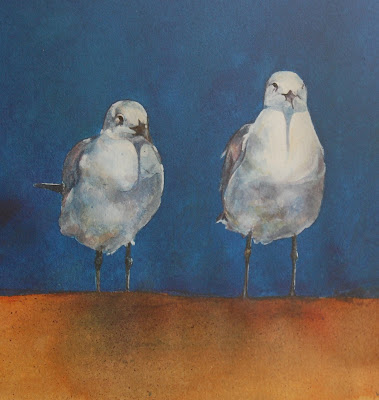 This is a cropped version of a painting I did last year . I have loaded it to a Face Book group that hopes to raise money for the Gulf Spill victims. Paul Jackson from Missouri is leading the way and I invite all my artist friends to get on the site and upload an image. Not many of us can drive to the Gulf to help clean up...esp when the hole is still leaking,no, spewing oil and will for a couple more months! As artists, this what we can do and all of us, I dare say, have a spiritual connection with nature and this what we should do... if not more.
Please spread the word and do what you can to help. It effects the whole world.